Hit enter to search or ESC to close

How does it work, how do you build it

How does it work?

4 actuators, a controller, and the SimFeedback software

The system comprises 4x SFX-100 (Actuator) + SimFeedback (PC Software + Arduino Firmware) system. As opposed to a commercial system, this is a DIY system. You need to build the actuators, wire up the controller, flash firmware and setup.

This is a “Platform mover” design. In that the platform moves on 4 actuators, allowing for Roll, Pitch and Heave motion. These in turn allow you to get Surge and Sway simulated effects. These combination of movements will allow you to get “motion cues” – the surface of a race track getting bumpy into a braking zone, the ripple on a rumble strip, clipping a sausage curb, hitting the brakes, gear shifts, rubbing paint with other cars.

The SimFeedback software also has output for sound based effects through a soundcard, such as RPM vibration.

In order to generate motion, SimFeedback receives telemetry (via an open source plugin system) from the game and translates the telemetry into actuator positions at high frequency. A range of configuration options determines how that translation happens.

For example: Under hard braking the games physics engine has determined that there is a negative acceleration value of -1.2G, this would be sent out of the game on the “AccelG” variable. SimFeedbacks reads that value and sends to the effect(s) that are using that variable. Normally this would be the “Surge” effect, -1.5 might correlate to -12% on the setpoint graph. This would be the target the actuator(s) need to move to based on various settings and the actuators previous position.

The better physics telemetry output from your game engine, the better the experience in your SFX rig will be – from game to game the accuracy of the physics varies quite a bit in terms of what they calculate and send, the better it is the more “alive” your rig will feel.

The motion output is sent to an Arduino running some custom SimFeedback firmware . The Arduino is wired to each of the AC Servo Drives. Each of these drives (powered by 220v AC) in turn sends signals to their respective Servo Motors on top of each SFX-100 actuators. The servo rotates clockwise/counterclockwise, this translates into linear (vertical) travel via a standard ball screw – and in turn moves each corner of your sim rig up/down.

Note: This is a Closed loop system with no limit switches or calibration required. This keeps the system both fast and simple.   SimFeedback is designed to always be started with the actuators from a fully lowered position, when the Start button is pressed it moves the actuators to a known assumed start position.

Here’s a diagram of the complete system

Thanks to 3D printing you can build your own

The SFX-100 Actuator is an open source design that you can build yourself. We supply you the parts list, suggested suppliers and the .STL files for 3D printing. Aside from the 3D printed pieces everything else can be built in your regular DIY/maker garage. For the majority of builders so far 3D printing is new to them and (from the authors experience) is fun and easy to learn. We’ll help you along with that.

The actuator is incredibly powerful. Topped with 750watt servo motors, there’s 3kW of available power to move your sim rig. Thankfully for your power bills they are incredibly power efficient (more on that later) and require a lot less power in operation. There is virtually no backlash, and they are relatively quiet in operation.

The beta testers have seen 9+ months rigorous usage with no noticeable wear. Thanks to the open source design should anything happen in future you either print new parts and/or order off the shelf replacement components.

Below a parts diagram of an un-assembled actuators. Please note 6 screws and an o-ring are missing from this photo. 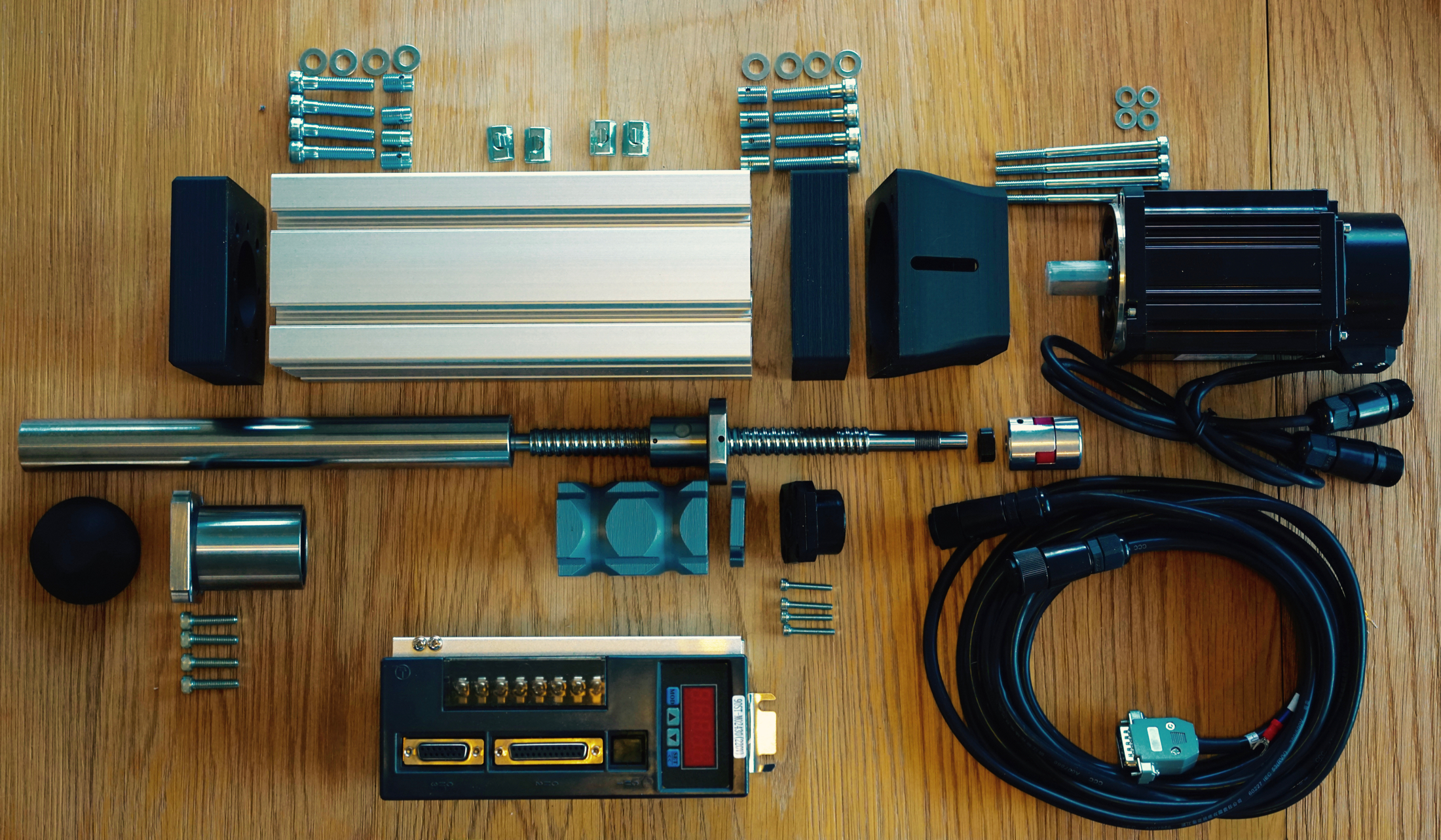 The amount of power will be relative to the load the system is under; for instance with an approximately 170kg load author was seeing 50watts to hold the rig at the start position, 70-90watts gentle track surface, 200watts F1 car rough track surface, 300watts crashing.

Your own figures will vary – the more weight the actuators have to move, the more power consumed. Rest assured it’s not drawing 3kW from an outlet constantly.

Video showing at the wall power consumption of the 4 actuators :

This is not quite Ikea, we are using industrial components...

This is not Ikea level of DIY.  This guide is not a “paint by numbers” in that there will be points that you will need to fill in the gaps, devise your own solution for problems you encounter and/or seek google help. You should familiarise yourself with components if you’re not already familiar with them. This project assumes a level of mechanical DIY/proficiency as you are building something that will easily move 200kg of rig very quickly. If in doubt research forums to see others experiences.

Like a direct drive wheel, a motion sim platform is not a toy. While they’re awesome fun you do need to take care. The motors are incredibly powerful and don’t know to stop if somethings wrong – there is some protections for this in the servo drives, don’t count on the rig stopping unless you tell it to stop.

** Not if but when depending on your floor substrate, intensity levels, motor speed and what you’re racing. The author has seen his rig move 100mm in a particularly intense F1 racing evening on a concrete floor.